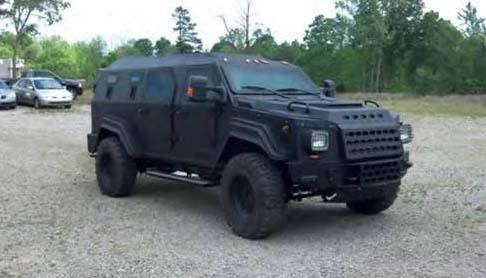 A hybrid vehicle maker announced in May it would build and retrofit vehicles in Danville, creating 150 jobs within three years.

A $420,000 grant from the Virginia Tobacco Commission got the ball rolling so the company could purchase equipment and begin hiring, according to a city news release.

The company has secured orders for mild hybrids, where an electric motor assists the conventional combustion engine. Founder and CEO Jim Bailey said the company can make a variety of vehicles, including buses and armored vehicles. In partnership with the AVRC, the firm can also taking existing vehicles — “anything from a scooter to a semi-truck” — and retrofit them to become mild hybrids, he added.

Hybrid Vehicles will also install proprietary solar-powered cooling systems into most of the buses and armored vehicles it builds. Bailey said the company plans to do work for school buses and delivery, transit, SWAT and defense vehicles. The company will also use AVRC’s military off-road test and training site and testing equipment to collect data on vehicle propulsion and fuel economy performance.

This was the type of work the late founder of the AVRC, Richard “Dick” Dell, envisioned when he set up shop in Danville in 2009, said son Richard D. Dell Jr. For Danville, Dell said it’s creating a “stable long-term growth engine for job creation,” as he sees the start of a local defense cluster.

That gives Danville Community College students enrolled in welding, machining and automotive programs another option for jobs, said DCC vice president for academic and student services Christopher Ezell. Most graduates of those programs find jobs as their skills are in high demand.

“This is very important to us. It just shows the economic development efforts that are certainly paying off,” Ezell added.

Bailey and his wife moved from East Helena, Mont., to open the facility and headquarters in Danville.

“We are pleased with the growing alternative vehicle sector that we are attracting to our region. Danville offers an attractive operating environment and a growing number of entrepreneurs that collaborate together on projects to create better paying jobs for our citizens,” said Danville Mayor Sherman Saunders in a statement.