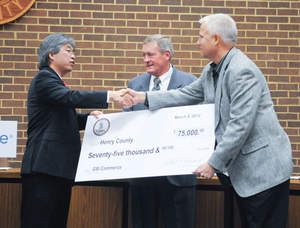 GSI will receive state and local incentives as part of agreements company officials signed Monday. The agreements call for GSI to create 61 jobs by Dec. 31, 2014.

According to a performance agreement signed with the state, the jobs are to have an average annual wage of at least $24,315.

Some of the new positions are posted online now at jobs.ebaycareers.com, and the company will begin the interview process to fill those positions within the next two weeks, Feury said.

Training is anticipated to begin soon thereafter, and the new facility is expected "to go live by the end of April," he said.

Since textile jobs went offshore, the building has represented the downside of Henry County, said Mark Heath, president and CEO of the Martinsville-Henry County Economic Development Corp. (EDC). But with GSI's announcement, the building "is being brought back to life," he said.

It will house GSI's fulfillment center for Hanover (called The Company Store), according to Heath and Mike Bomba, GSI's vice president of fulfillment services.

From the new location, employees will pick, pack and ship orders, said Bomba. The first product is expected to be shipped from the new facility in May, he said.

The facility also is large enough to handle any future expansion, said Bomba, who anticipates "some annual growth. ... We don't see a problem with achieving" the job creation goal outlined in the performance agreements.

The company's two facilities in the Bowles Industrial Park will remain open, Feury said. Those two facilities "are totally full," he said. "This is going into a new, start-up facility."

Heath said Kentucky was the primary competitor for the project, mainly because there is a UPS hub there, Bomba said. Bomba attributed the company's decision to expand in Henry County to Feury's capabilities and leadership.

Overall, Bomba said, he is excited about GSI's local expansion because of "the people, the work ethic and the commitment. It is phenomenal."

Gov. Bob McDonnell approved a $75,000 grant from the Governor's Opportunity Fund to help with the project, and Henry County provided a matching $75,000 grant to help offset the costs of improving the building.

The Virginia Department of Business Assistance will provide funds and services to support the company's recruitment and training activities through its Virginia Jobs Investment Program, according to a news release from McDonnell's office.

The Virginia Economic Development Partnership worked with Henry County, the EDC and the Southern Virginia Regional Alliance to secure the project for Virginia, the release said.

Virginia Secretary of Commerce and Trade Jim Cheng said he was glad to visit the area Monday to participate in the announcement, which he said will "add to the momentum that is continuing to build here" after two companies — LamTech and Commonwealth Laminating — recently announced plans to expand or locate in the area.

GSI, with headquarters in King of Prussia, Pa., operates more than 3 million square feet of fulfillment space across seven facilities with the aim to serve customers as quickly and efficiently as possible, the release said. The company has the ability to process more than 30 million packages annually, it added.

The announcement followed a joint meeting of the Henry County Board of Supervisors and the Industrial Development Authority to approve the performance agreements.

Danville Supercomputer Up and Running
With new world of technology, biomass company grow...