Governor cuts ribbon on IT Academy

Calling the Southern Virginia Higher Education Center the "home to bold thinkers and innovators" Governor Terry McAuliffe addressed the higher ed center staff and distinguished guests Tuesday before cutting the ribbon on the new addition to the facility, its IT Academy.

The center continues to do big things. Less than a year ago, the facility became a Center of Excellence facility offering three programs: welding, precision machining and industrial maintenance.

The IT Academy (ITA) is a short-term, non-credit training program designed to prepare individuals with the skills and certifications required for employment in Southern Virginia's growing Information Technology sector.

ITA will provide a core curriculum leading to CompTIA certification in A+, Network+ and Server+. Each of these courses will last three to five weeks and provide approximately 100 hours of instruction. Students will be able to complete the entire core curriculum within 90 days.

McAuliffe said the higher ed center is taking the next crucial step in meeting IT demands by creating a workforce for these cutting-edge jobs.

"They are the jobs of the 21st century. We can no longer depend on the economy of the past," he added.

ITA will also offer intermediate and advanced level training based on industry needs and employer demands.

ITA differs from other programs because of its focus on applied learning and practice. Classroom instruction is paired with hands-on exercises that take place in a lab that replicate an actual data center environment.

Students are given intensive training, so they can quickly earn their certifications and enter the workforce.

Southern Virginia Higher Education Center is working closely with regional IT firms including Mid-Atlantic Broadband Cooperative, ATOS/Microsoft and HP to plan and implement the IT Academy.

Classes will begin in August, and courses should take four to five months for completion. They are planned for Monday through Thursday from 5 to 9 p.m., but times are subject to change. 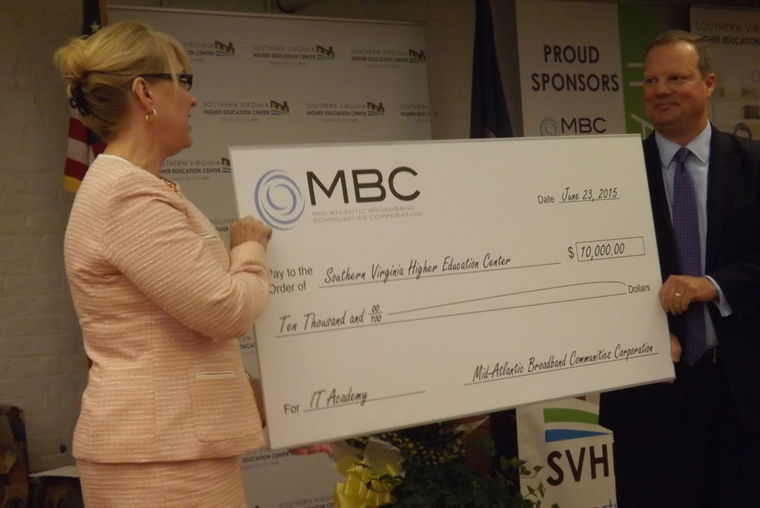 The governor also promised to include funds in his budget to support the higher ed center.

He said, "We need to reward these folks for stepping out and making these things happen."

The IT Academy will be led by Academy Project Manager/Trainer Kelly Shotwell who will be responsible for IT Academy recruitment and initial course instruction in A+, Server+ and Network+.

Shotwell comes to theSouthern Virginia Higher Education Center after recently retiring from a  31-year career as the director of information systems for Vance County Schools in Henderson, North Carolina. In her former position, she was responsible for the implementation and ongoing support of system-wide student information systems, including student and parent portals.

Shotwell, formerly Rebick, has strong ties to Halifax County having moved here with her family when she was 12 years old. After graduating from Halifax County Senior High School, she attended the University of Virginia where she earned a Bachelor of Arts with distinction in anthropology. She later returned to school, attending Vance-Granville Community College where she juggled work, family and classes to earn an Associate of Applied Science in business computer programming.

Next year, the academy also is partnering with Danville Community College to offer the networking academy with Halifax County High School.

The CISCO networking academy will begin offering CISCO 1 and CISCO 2 giving students the chance to earn the CCENT Industry Certification.

Ultimately students will have the chance to earn an Associate of Applied Science or attend a four-year university to study fields like network administrative or network engineer.

Offering his success story at the opening for the IT Academy was welder Marque Medley who landed a job at Comfort Systems USA after becoming one of the first Southern Virginia Higher Education Center Work Ready Foundations graduates in 2013.

As he began working at Comfort Systems, they gave him the support needed to return to expand his skill set and become a 2015 graduate of the Virginia Technical Institute.

Medley said the higher ed center staff was there for him when he wasn't sure how to support his family, and after learning about the 7-week work ready program, he knew this is what he needed to complete.

The program gave him the strong work ethic, skill set and confidence needed to seek a job, and he said it added value to his life.

Concluding his remarks he encouraged others to take part in the programs at the Southern Virginia Higher Education Center, including the new IT program, and he said, "Thank you for believing in me, and opportunities do live here at SVHEC."