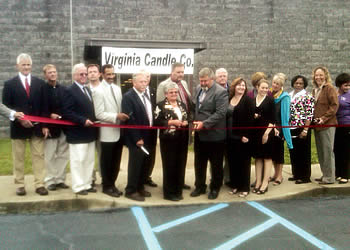 Virginia Candle Co., a Lynchburg business that makes and sells WoodWick and Ribbonwick candle brands, is bringing its distribution and warehousing operations — and some light manufacturing — to the former eToys location.

Company and Pittsylvania County officials announced the company's plans during a ceremony at the facility Wednesday at 9141 U.S. 29 in Blairs.

Virginia Candle Co., started in 1990 in a garage in Lynchburg, will provide about 50 jobs in Pittsylvania County. That number will grow to about 150 during the Christmas season.

"This is just overwhelming," Virginia Candle Co. CEO and president Jim Ramaker said of the welcome and support the business has received in the community. "We've always been proud of our homegrown status in Virginia."

The company's top-selling brands include Ribbonwick candles that "offer truly revolutionary innovation with a proprietary, patent-pending wick design that creates a beautiful, mesmerizing flame," according to a news release from Virginia Candle. Its WoodWick brand "features a clean, contemporary look with a natural wooden wick that creates the soothing sound of a crackling fire, while fragrancing a room with genuine, true-to-life scents."

The manufacturer had looked at other locations, including those in Bedford and in North Carolina, before choosing the Blairs site. The business will start out using about a third of the 435,000-square-foot facility, which it will lease, said Angela Bateman, the company's customer service director.

The move consolidates three facilities — two distribution centers in Lynchburg and its light manufacturing that had been done by an outside contractor, Bateman said. The company will manufacture its packaging for candle fragrances at the Blairs location, she said.

During an interview after the ceremony, Ramaker said the Blairs site is accessible from the company's Lynchburg location and has space for expansion. Virginia Candle Co. employs from 150 to 400 in Lynchburg, he said.

Jobs at the Blairs location will include those for pickers, packers, inventory control, assembly workers and forklift operators, Bateman said. The pay will start at slightly above minimum wage, Bateman said.