U.S. Senator Tim Kaine was on hand to help unveil the new training equipment at the Center for Advanced Film Manufacturing. Photo courtesy of CAFM.

A new machine installed at the New College Institute (NCI) should help Martinsville-Henry County keep high-tech companies and attract new ones by ensuring that people can learn advanced skills they will need to work for the firms, local industry representatives, educators and others said Thursday when the device was unveiled.

The academic coater is a one-of-a-kind, roughly $1 million machine to be used by the Center for Advanced Film Manufacturing – a partnership of NCI, Patrick Henry Community College (PHCC), the Martinsville-Henry County Economic Development Corp. (EDC) and Eastman – mainly to train people for jobs with Eastman and other performance film manufacturers.

The Center for Advanced Film Manufacturing is a 28-credit program intended to teach people the skills they need to make performance films, such as ones installed on windows to block solar radiation, with computer-run equipment. But the coater could be used by other companies to teach skills common to all advanced manufacturers, NCI officials said.

Governor cuts ribbon on IT Academy 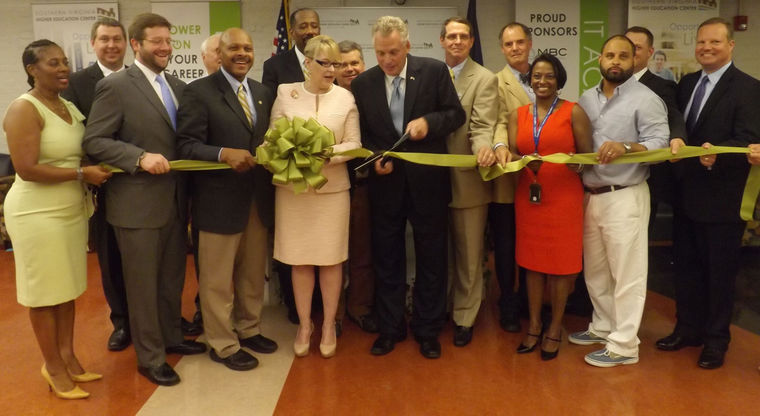 Calling the Southern Virginia Higher Education Center the "home to bold thinkers and innovators" Governor Terry McAuliffe addressed the higher ed center staff and distinguished guests Tuesday before cutting the ribbon on the new addition to the facility, its IT Academy.

The center continues to do big things. Less than a year ago, the facility became a Center of Excellence facility offering three programs: welding, precision machining and industrial maintenance.

The IT Academy (ITA) is a short-term, non-credit training program designed to prepare individuals with the skills and certifications required for employment in Southern Virginia's growing Information Technology sector.

ITA will provide a core curriculum leading to CompTIA certification in A+, Network+ and Server+. Each of these courses will last three to five weeks and provide approximately 100 hours of instruction. Students will be able to complete the entire core curriculum within 90 days.

Governor Terry McAuliffe announced today that Monogram Food Solutions, LLC, a Memphis-based manufacturer of value-added processed meats, will invest $7.244 million to establish a warehousing and logistics operation in Henry County. The company has operated a meat snacks production facility in the Henry County Patriot Centre Industrial Park since 2009. Virginia successfully competed against two other states for the project, which will create 101 new jobs.

Speaking about today's announcement at an event in Henry County, Governor McAuliffe said, "I am thrilled to be back in the region to announce Monogram Food Solutions' new operation, which brings the company's total job creation in Henry County to more than 300 in less than one year. Working with companies like Monogram to grow and create new jobs in regions that need them is a key part of my administration's efforts to build a new Virginia economy. I thank Monogram for continuing to invest in our great Commonwealth."

"Monogram's announcement is further proof that Virginia offers the assets companies seek to grow their businesses," said Secretary of Commerce and Trade Maurice Jones. "The combination of great talent, strong infrastructure, pro-business climate and great incentives distinguish the Commonwealth as a great place for business. We look forward to continuing our partnership with Monogram for years to come."

Gov. Terry McAuliffe came to Danville on Friday to honor the more than $1 million — and a nearly equal amount of hopes — invested into the freshly completed Gene Haas Center for Integrated Machining at the Institute for Advanced Learning and Research.

The ribbon cutting gathered together a long list of politicians, funders, donors and educators to remark upon and honor the milestone achievement that is the Gene Haas Center. The center, part of the Capstone Integrated Machining Technology project, is a partnership between Danville Community College and the Institute.

With a $1 million Gene Haas Foundation endowment, a $1.9 million Danville Regional Foundation grant and an additional $650,000 worth of Haas Automation equipment, the center is state-of-the-art workflow cell training lab. Funding has come from numerous private sector donors with the majority coming from the Gene Haas Foundation.

Governor Terry McAuliffe will provide remarks and participate in the ribbon cutting to officially open the Gene Haas Center for Integrated Machining at The Institute for Advanced Learning and Research (IALR). A number of globally recognized partners and Gene Haas, founder and president of Haas Automation, will also be in attendance at a special ribbon cutting in Danville, Virginia on Friday, May 15 at 10:00 a.m. The event will be available via a live webcast stream on IALR's webpage, www.ialr.org.

The Gene Haas Center will include a workflow cell training lab that will provide authentic learning experiences to students who have completed the Integrated Machining Technology Program at Danville Community College (DCC). Not only is the program unique, but it is a game changer for preparing the future workforce. The program will provide a third-year level of learning for students.

eBay will expand its operations in Henry County, adding 191 full-time jobs with an annual payroll of more than $4 million and investing $5.8 million in capital improvements, officials announced Thursday.

The expansion will make eBay the second-largest non-service employer in the region after Eastman Chemical Company, according to Mark Heath, president and CEO of the Martinsville-Henry County Economic Development Corp.

The company will move into a 400,000-square foot facility on Joseph Martin Highway in Ridgeway, where it already has other operations. It will make improvements to the building — the work already has begun — and also put in materials-handling equipment.

Stewart-Haas Racing Driver Kurt Busch to Carry Commemorative Decal Highlighting $1 Million Grant to The Institute for Advanced Learning and Research on No. 41 at Richmond April 23, 2015

The Institute for Advanced Learning and Research (IALR) and Danville Community College (DCC) are the recipients of a $1 million grant from the Gene Haas Foundation, which has granted more than $11 million to entities that champion advanced manufacturing education.

The $1 million grant will be used to build the new Gene Haas Center for Integrated Machining on the IALR campus in Danville, Virginia, and support a third-year level of learning for students completing DCC's Precision Machining Technology two-year degree program. The experience will provide students the opportunity to train in an authentic manufacturing workflow cell as part of the Capstone Integrated Machining Technology project being implemented for the first time in America through the IALR/DCC partnership.

Governor Terry McAuliffe announced today that Hardide Coatings, Inc., a manufacturer of advanced surface coatings, will invest $7.25 million to establish its first Virginia operation in Henry County and create 29 new jobs with an average salary of $50,000, which is well above the average prevailing wage in the region. Virginia successfully competed against Oklahoma and Texas for the project, which is a result of the Governor's meeting with company officials outside London during the 2014 Farnborough International Airshow.

Speaking about today's announcement, Governor McAuliffe said, "Creating jobs in the advanced manufacturing sector is critical as we work to build a new Virginia economy. I am thrilled to announce these new jobs, which pay well above the average prevailing wage for the region.I had the opportunity to meet with company officials last summer in the U.K. about this project,and we are honored to welcome Hardide Coatings to the Commonwealth's growing roster of international companies."

"This is a big win for rural Virginia as the region continues its economic rebound," said Maurice Jones, Virginia Secretary of Commerce and Trade. "Hardide Coatings is a growing global company, and this significant investment to expand its manufacturing presence to serve worldwide customers is a great testament to the strong workforce and infrastructure in place in Martinsville-Henry County and the Commonwealth as a whole."

The video you're about to watch is astonishing.

In it, GM engineer Jim Mero beats VIR's Grand West Course into submission with the mallet that is the 2015 Chevrolet Corvette Z06.

Mero and the Chevy team spent a few days at the track with a bone-stock car, and this video is the fruit of the effort. It's a scalding 2:41.3 lap time, which is enough to put the Z06 in the ring with some of the world's most brilliant supercars.

Which machines do I speak of? By comparison, our friends at Car and Driver recently whipped out a 2:43.1 time in the Porsche 918 Spyder. It's the fastest anyone from the magazine has managed to lap the course.

Watch it go down, as captured by the Vette's Performance Data Recorder.

The Corvette in the video is running heavy-weight oil and the most aggressive suspension settings detailed in the owner's manual. Other than that, it's just Mero coaxing crazy velocity from the car.

The dude's no stranger to whipping a Corvette around, and anyone who knows him will tell you he's one hell of a driver. If his name sounds familiar, it should. He's the man who scalded the Nürburgring with the C6 ZR1 not so many years ago:

Speaking of the Nurburgring, it's no secret that GM will take another stab at the Green Hell with the new Z06. We can't wait to see what Mero does there.

Speaking about today's announcement, Governor McAuliffe said, "Monogram Food Solutions is a major employer in Martinsville-Henry County, and an investment of this caliber creating 200 new jobs is a tremendous win for the region as it continues to rebound economically. The company is putting more people back to work and helping to diversify the industry base, both of which are critical for building a new Virginia economy."

"Today is a great day for economic development in Virginia," said Maurice Jones, Virginia Secretary of Commerce and Trade. "Strengthening relationships with existing businesses is essential to the economic vitality of the Commonwealth, and Monogram Food Solutions continues to thrive in our welcoming business environment. The company's decision to grow its operation in Henry County is a great testament to the advantage of doing business in Virginia."