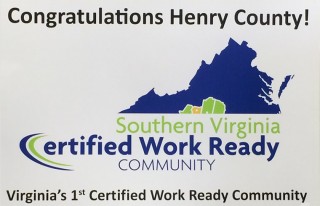 Jones spoke Thursday morning at Eastman Chemical Company in Fieldale and was joined by several other local leaders.

ACT is a national program that offers National Career Readiness Certification (NCRC) to employees in participating counties and cities. NCRC is a portable, industry-recognized credential that clearly identifies an individual's skills in reading for information, applied math and locating information.

ACT also seeks out employers willing to recognize and recommend the NCRC program as a measure of foundational workplace skills.

"In addition to Henry County, we have (five) other areas around here that are perhaps within six months of receiving this designation," Jones said, including Martinsville, Danville, Pittsylvania County, Patrick County and Halifax County.

Jones praised the collaboration between employers such as Eastman and educators such as Patrick Henry Community College that allowed Henry County to become the state's first ACT Certified Work Ready Community.

According to Jones, the certification will help make sure that well-trained employees can be found locally, which will help local industries to expand and also help draw new businesses to the county.

"Nothing is more important than the quality of the workforce," Jones said. "Workforce is the number one ingredient for growth, without a doubt. It is the game changer. Having the best workforce will position our communities for maximum growth."

"With these fundamental skills, you can go into any work site, and with hustle, you can get the job done," Jones said. "That's what we want to be able to promise our young folks."

From the Martinsville Bulletin