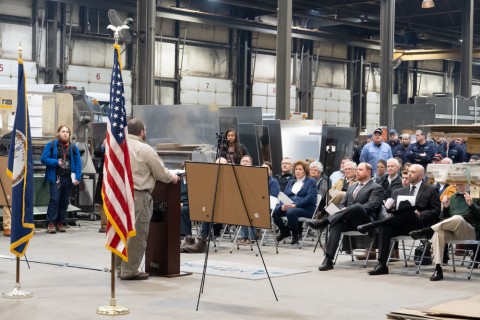 Pittsylvania County officials and community leaders joined Amthor International representatives to celebrate the Company’s $30 million capital plan announcement, which includes the construction of a new 33,000-square-foot facility in the Gretna Industrial Park. The nation’s largest manufacturer of truck-mounted tanks, Amthor International is investing over $4 million and creating 60 new jobs with this new standalone facility. Additional equipment investments are being made in the existing plant in order to meet a robust pipeline of received orders.

A fourth-generation family-owned company, Amthor International manufactures truck-mounted tanks, including uses for refined fuel, propane, mining, vacuum and septic, portable restroom, water, well-drilling, and construction industries. Amthor International has been in Gretna, VA since 1992, and with this third expansion, will employ over 200 people. Their second expansion in 2018 resulted in the Company relocating its corporate headquarters to the Gretna plant while investing over $2.5 million at the existing plant and announcing the creation of 90 new positions over the next five years, many of which are actively being recruited.

“It is always exciting when existing Pittsylvania County businesses choose to continue investing in our community by expanding their operations,” said Board of Supervisors Chairman Vic Ingram. “The Board of Supervisors is thrilled that Amthor International has found success in Gretna and has decided to build upon that success. Congratulations to Amthor, and congratulations to the 60 new employees that the company will now employ!”

“The Town of Gretna and the Gretna community are very pleased that Amthor is continuing to invest in and expand its operations in our town,” said Gretna Town Mayor Keith Motley. “Amthor and the Amthor family have become a valued and respected part of our town and we are happy to be a part of this next step in their Company’s future.”

“This deal came together very quickly, due to Amthor International’s immediate need for a standalone building solution”, said Matt Rowe, Pittsylvania County’s Economic Development Director. “Due to the lack of available building product in the immediate area, we were forced to find a creative solution for their needs. We reached out to Tradesman Trucking, who had recently announced that they were building a new facility of similar size and scope in the Gretna Industrial Park and inquired about the possibility of them modifying their planned building for Amthor International’s use. This was the only way for us to meet the aggressive required development timeline and confidently secure the project. Thankfully, with contract agreements now signed, this approach was acceptable to all parties, and it results in us now having two quality tenants in the park.”

“Tradesman Trucking/ Tradesman XDR in collaboration with Amthor International has elected to forgo its initially planned building project in the Gretna Industrial Park in favor of erecting a larger 33,000-square-foot facility with Amthor as part of Amthor's economic development initiatives,” said James Garner, Managing Partner of Tradesman Trucking. “Tradesman will simply "relocate" its plans to another parcel within the Gretna Industrial Park and delay its development for approximately nine months to one year while this facility is being constructed. Tradesman is extremely thankful for the development partnership with Amthor International and is excited about having a small role in aiding its neighbor to invest in this wonderful town, its people, and the greater community at large.”

“I was very pleased to learn about this announcement by Amthor International of their plans to increase production and offer more jobs right here in Pittsylvania County,” said Delegate Les Adams House of Delegates, 16th District, Tobacco Commission. “This investment in our locality is more good news for Southside Virginia communities and the expansion of existing business is an indicator that the economic prospects for families in our region are bright.”

“I am very excited that a well-known, community-focused company like Amthor International is expanding again here in Pittsylvania County,” said Callands-Gretna Supervisor Darrell Dalton. “When a company chooses to continue their growth here in Pittsylvania County, we are thankful to them for their investments and job creations for our region. Today, is a great day for the Gretna Industrial Park as they receive their second tenant within just a few short months of their first tenant. Pittsylvania County looks forward to your continued growth and success.”

“When we started Amthor International back thirty years ago here in Gretna, we had zero orders and since that time we have grown to be the largest and most diverse manufacturer of truck tanks here in the United States,” said Brian Amthor, Executive Vice-President, Amthor International. “Through years of hard work and determination to build a brand that would last generations, we were able to accomplish what we set out to do. Now, one month after our 30th anniversary, we are making the largest announcement in our company’s history with re-investing in our company, our employees, and our community here in Central Virginia. Gretna is our home and will be for years to come and that is why we are planning a second manufacturing plant to help us keep up with the global demand for our products. Our overall investment between the project, equipment, and inventory will be $30 million and we are excited to be able to do that in the town where it all began. The new factory itself will be 33,000 square feet. This is such an exciting time for everyone involved and we are so proud to be able to take our company to the next level.”